Prior to the Great War Roeux was a small quiet French Village which consisted of a Chateau (Large house), an Inn, and Agricultural works and a few dwellings. It had a railway station and works situated  on the Arras/Douai line.

In 1914 it became like most villages in the area, in the hands of the Germans.
In September 1916 as a result of the Somme Offensive a massive civil engineering project started. Roeux was part of this project. The Siegfried Stellung known by the Allies as the Hindenburg Line.

Using German and Belgium labour and 50000 Russian POWs they constructed defensive positions along an 85 mile front.

One of the key villages in the defensive line was Moncy Le Preux, three miles behind the main front line, dominating the central battle front. From here German artillery could shell Arras.

The other village in German hands was even more of a natural fortress was Roeux. High on the wooded northern bank of the River Scarpe, standing over a system of deep natural caves.

Protected on the south bank by the River and marshes and to the north the embankment of the Arras/Douai railway line provided a man made barrier.
Concealed in the outbuildings of the Chateau, they built one of the largest blockhouses yet seen on the Western front.

Near to the railway station, a derelict dye factory had been fortified and connected to the Chateau block house by tunnels. Two tall brick towers, north and south of the railway works. A jumble of old vat houses, engine sheds and chimney stacks- the Chemical works as it was known, soon became too familiar to the British soldier, who feared counter attack from the defenders, who were in deep trenches in two small copses, Roeux Wood and Mount Pleasant Wood.

The First day of the Somme and the First day of Arras are compatible battles. Each began with a prolonged bombardment, followed by an assault by 14 Divisions, along a 25,000 yard front.

The important difference was the use of more artillery pieces, one every 21 yards opposed to one gun every 455 yards, the creeping barrage, and the high number of quality shells less duds.

The battle commenced at 0530 hrs on Easter Monday 9th April 1917. A massed machine gun barrage, firing over the heads of the attackers, the use of 40 tanks and gas aided the attack.

Because of the broken ground, and unable to bring up the guns, the attack stopped short of Moncy le Preux and Roeux. The Germans were in total disarray, but failing to take the iniative, the Germans regained their defensive line and were able to move reinforcement into the area.

Moncy was taken on the 11th April by the 37th Division.

In the opening phase of the battle, the 4th Division had taken Fampoux, along with the Hydrabad Redoubt. Between here and Roeux, the ground was open.

On 11th April it was planned to take Roeux, Pelves and Greenland Hill.

After a six hours bombardment on Roeux Chateau and the Chemical works. As the troops of the 10th Brigade were forming up, for a daylight raid, they were spotted by German Aircraft, who brought down heavy artillery.

The two first line Battalions 1st Royal Irish Fusiliers and the 2nd Seaforth Highlanders, move forward, despite heavy machine gun fire from the Chateau, the Chemical works, the station and the railway embankment.

The 4th Division was relieved by the 9th Scottish Division who made the next attempt.

On 12th April the plan was for the first wave advance on the area between the railway station, the inn. The second wave was to take the Chemical works, Mount Pleasant wood and the main village.

The attack was a disaster, when the Highland Brigadesran into heavy machine gun fire from the Chemical works and long range shelling from across the River Scarpe. They took heavy casualties. The South Africans came under heavy shell fire as they were forming up in Fampoux village. The station remained intact.

Both assaulting battalions were removed from the line.

The 51st Highland Division, who had been at rest relieved the 9th Division. The position they took over was in full view of the Germans. They moved to take the Chemical works and the village.

The plan was for the 153 brigade to attack on the left opposite the Chemical Works and 154 Brigade. They would attack Mt Pleasant Wood and the village in the south.
On 23rd April, 51st highland Division launched “The most savage infantry battle” Initially things went well, with the 7th Gordons taking many prisoners. The 7th Black Watch took many casualties due to heavy machine gun fire. The 4th Seaforths got into the Chemical works, with the help of a tank and helped the highlanders push close to Greenland hill.

As reserves began to move forward the Germans mounted a counter attack, emerging from the tunnels in the Chemical works. It was a confusing situation, with a battalion sized counter attack coming down the slopes of Greenland Hill, towards the Village.

During the night the 4th Seaforths were made to clear the Chemical Works. It is estimated they took 2000 casualties.

With the 34th Division in the line, it was decided to continue the fighting. They consisted of recruits and conscripts, with no knowledge of the area.
On 28th April the attack took place on the German trenches. This was a total disaster, with only the 11th Suffolks getting near to some houses.
34th Division was relieved on 1st May with 2600 casualties.

Roeux and the Chemical works finally fell on 11th May. The assault was carried out by 4th Division, who had been in continuous action since the start of the battle.

Their losses had been great and could only muster 2444 officers and men, with no battle reserve.

With the use of artillery, on loan, including siege guns, they achieved all their objectives with little loss.

The Germans in some cases held out until the next day, but Roeux and the Chemical Works was taken.

The Germans were not going to give in without a fight. Units of the 51st Highland division returned to Roeux, with elements of the 17th Northern Division. A strong German counter attack with fresh divisions was thrown backby the Northern battalion. The 10th West Yorks re occupied the ground around the Chemical works inflicting heavy losses with their Lewis guns.
This was the conclusion of the battle.
​
A month of fighting, Five divisions fought there, two of them twice, and nearly 8,000 killed or wounded. 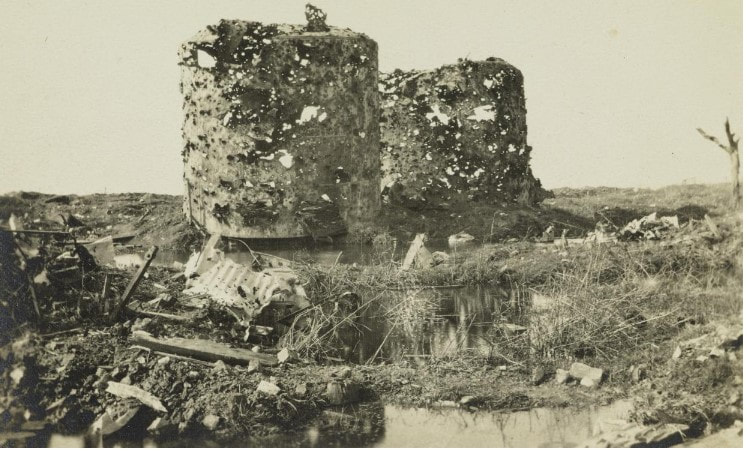 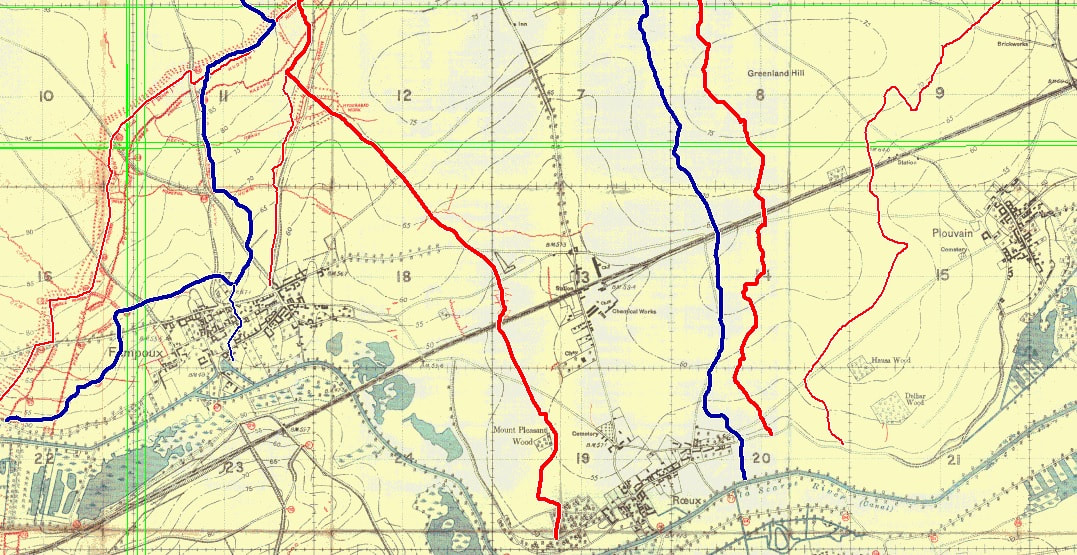 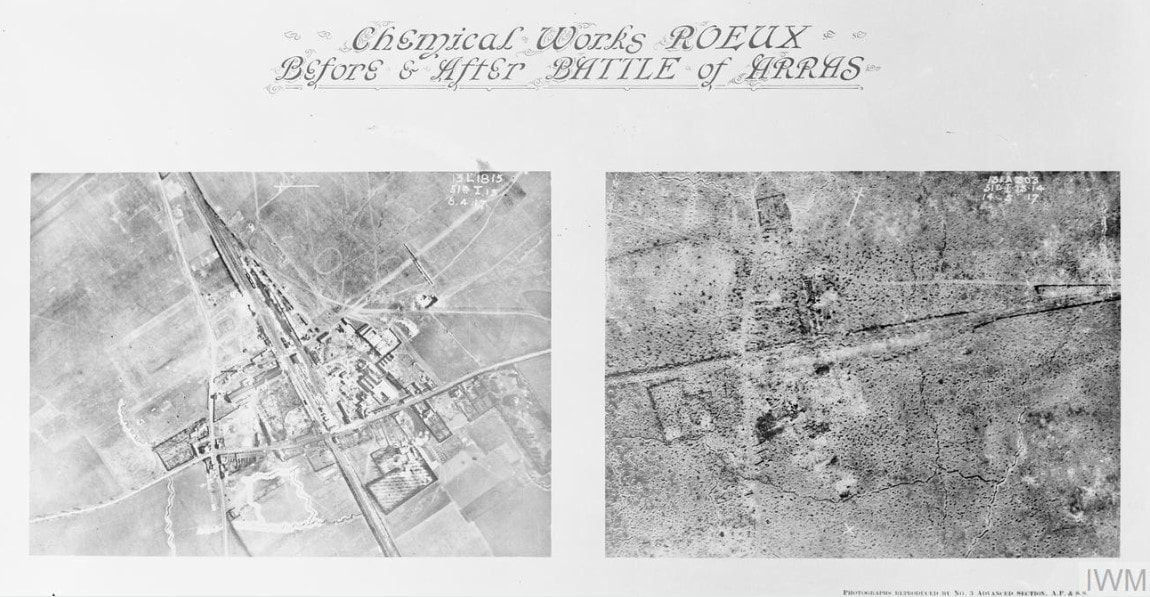